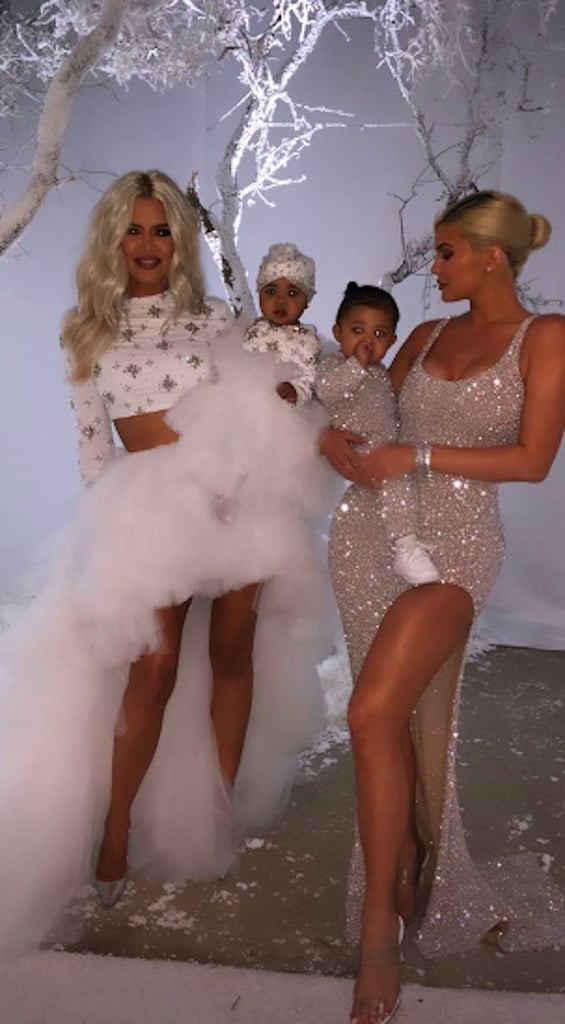 When it comes to Christmas parties, few can top the Kardashian-Jenner family's. Every year, the brood pulls out all the stops for their Christmas Eve bash, and on Monday, Kim and Kanye West had the honor of hosting it at their Calabasas, CA, home. The bash brought out the family's nearest and dearest, including Kendall, Kourtney, Khloé, Kris, and Kylie and pals Paris Hilton, Jennifer Lopez, Alex Rodriguez, Kimora Lee Simmons, Chrissy Teigen, and John Legend, who performed songs from his Christmas album, A Legendary Christmas. Scott Disick's girlfriend, Sofia Richie, even made an appearance after returning from her Mexico trip with Kourtney, Scott, and their kids.

Kim and Kanye basically transformed their home into a Winter wonderland featuring artificial snow, an igloo, a sled setup, and tons of desserts. "The West residence party is a winter wonderland with a huge mountain," Kim said on Instagram. "It's literally Calabasas turned into Colorado."

That same day, the family debuted their annual Christmas card on Instagram. The sweet photo includes Kourtney, Khloé, Kim, and Kylie with their children and brother Rob's daughter, Dream. However, missing from the fun were Kendall, Kanye, Travis Scott, Tristan Thompson, Rob, and Kris Jenner. According to Kim, the entire photo shoot was "last minute" due to their busy schedules and they tried to include as many relatives as possible. Thankfully, they were able to make it work!